The United States Congress answered this question in the preamble to the Endangered Species Act of 1973, recognizing that endangered and threatened species of wildlife and plants “are of esthetic, ecological, educational, historical, recreational, and scientific value to the Nation and its people.” In this statement, Congress summarized convincing arguments made by scientists, conservationists, and others who are concerned by the disappearance of unique creatures. Congress further stated its intent that the Act should conserve the ecosystems upon which endangered and threatened species depend.

Some of the many specific reasons to invest money and effort into actions to conserve species threatened by extinction include:

(From Fish & Wildlife Service. See/download the Why Save Species brochure at https://www.fws.gov/endangered/species/why-save-species.html)

Established in 1973 during President Richard Nixon’s administration. The Act stated that it is unlawful to “take” any endangered or threatened species. The act defines “take” as “harass, harm, pursue, hunt, shoot, wound, kill, trap, capture, or collect or attempt to engage in any such conduct.” 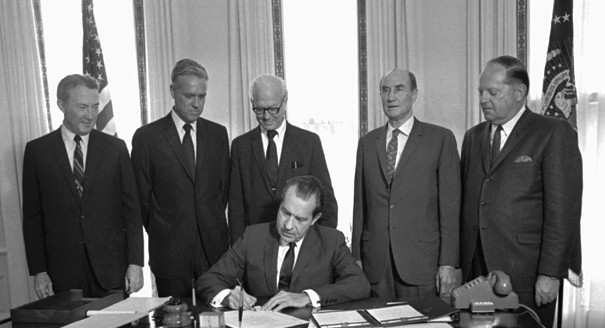 The Endangered Species Act provides a program for the conservation of threatened and endangered plants and animals and the habitats in which they are found. The lead federal agencies for implementing ESA are the U.S. Fish and Wildlife Service (FWS) and the U.S. National Oceanic and Atmospheric Administration (NOAA) Fisheries Service. The FWS maintains a worldwide list of endangered species. Species include birds, insects, fish, reptiles, mammals, crustaceans, flowers, grasses, and trees.

“The law requires federal agencies, in consultation with the U.S. Fish and Wildlife Service and/or the NOAA Fisheries Service, to ensure that actions they authorize, fund, or carry out are not likely to jeopardize the continued existence of any listed species or result in the destruction or adverse modification of designated critical habitat of such species. The law also prohibits any action that causes a “taking” of any listed species of endangered fish or wildlife. Likewise, import, export, interstate, and foreign commerce of listed species are all generally prohibited.”

Plant Blindness—In 1998, American botanists James Wandersee and Elisabeth Schussler defined Plant Blindness as “the inability to see or notice the plants in one’s own environment,” which leads “to the inability to recognize the importance of plants in the biosphere and in human affairs.” Plant blindness also comprises an “inability to appreciate the aesthetic and unique biological features” of plants and “the misguided, anthropocentric ranking of plants as inferior to animals, leading to the erroneous conclusion that they are unworthy of human consideration.” In addition, Plant Blindness is a factor in the ongoing declines in university botany programs, herbaria, and other plant science facilities.” (From Native Plant Conservation Campaign)

*Extinct– No living members of a certain species exist.

*Extirpated– Considered a “local” extinction; the species still survives but doesn’t exist in a specific area (where it once did).

*Endangered– Animal or plant species in danger of extinction throughout all or substantial portion of its range.

*Threatened– Species that is likely to become endangered within the foreseeable future throughout all or a major portion of its range.

Candidate Species— Plants and animals that have been studied and the Fish and Wildlife Service has concluded that they should be proposed for addition to the Federal endangered and threatened species list.

The Fish & Wildlife Service lists 719 animals and 944 plants designated as threatened or endangered in the U.S. (5/19)

State Species: Learn more about an endangered species found in each state by visiting this interactive map.

*Habitat loss (and alteration and fragmentation),

*Pesticide use and other toxic chemical pollution,

*Pollution of water bottles, straws, wrappers and other plastic products,

*Illegal trade of animals and plants, 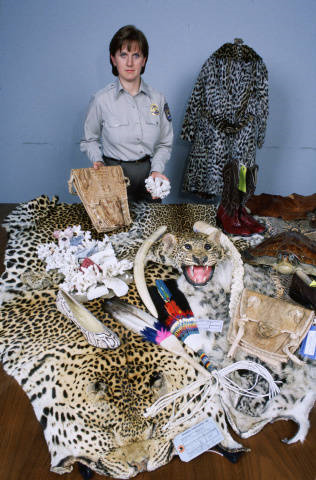 The Endangered Species Act has helped save 291 species.

Deseret Milkvetch (2018). (U.S. Fish & Wildlife Service). Others that have been aided by the ESA include: Peregrine Falcon, West Indian Manatee, Sea turtle, black-footed ferret, and the Maguire primrose.

The ESA Under Attack

Despite its well-known success protecting endangered species, the Endangered Species Act (ESA) has been under attack in recent years.

A series of legislative actions and Administration initiatives have been aimed at weakening the Act, changing the overall process by which it is implemented and reducing the protection for specific species, including gray wolves and sage grouse. Proponents of such actions argue that the Act is no longer effective as originally written, and has been unfair to landowners, ranchers, and companies wishing to build on or otherwise alter critical habitats.

In 2019, the Trump Administration announced proposed rules that would make it easier to remove an individual species from the endangered list and weaken protections for threatened species. In addition, there would be greater emphasis on the economic impact (rather than relying on science) when considering whether a species should be protected. Also, in January 2020 Congressional critics introduced a series of new bills that would weaken the Act.

Meanwhile, numerous environmental organizations, Congressional supporters, and many others are committed to ensure that the ESA remains intact and meets the original goal of protecting plant and animal species.

The following are  additional measures and programs developed to protect species on a global scale:

IUCN–The International Union for Conservation of Nature (IUCN) maintains a “Red List of Endangered Species.” It defines the severity and specific causes of a species’ threat of

CITES–The Convention on International Trade in Endangered Species of Wild Fauna and Flora (CITES) is a United Nations Convention that regulates the global trade in wildlife. https://cites.org/

Canada’s Species at Risk Act (SARA)–The purposes of the Species at Risk Act (SARA) are to prevent wildlife species in Canada from disappearing, to provide for the recovery of wildlife species that are extirpated (no longer exist in the wild in Canada), endangered, or threatened as a result of human activity, and to manage species of special concern to prevent them from becoming endangered or threatened.    https://www.canada.ca/en/environment-climate-change/services/environmental-enforcement/acts-regulations/about-species-at-risk-act.html